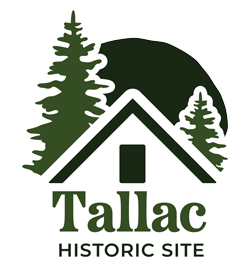 Researchers theorize that the Washoe Tribe has been present in the area surrounding the Tallac Historic Site since 4,000 BCE. For centuries, the tribe traveled across the Sierra Nevada and The Great Basin following the changing seasons. As the heat picked up in the Carson Valley, tribal members moved into the sacred Tahoe Basin for foraging, fishing, hunting, basket making, and more. Tallac Point and Taylor Creek are believed to have been important fishing sites. During this time, the native Lahontan Cutthroat Trout grew large and abundant, providing a substantial food source. The Washoe people also gathered materials here for basketry, a craft that they are renowned for. 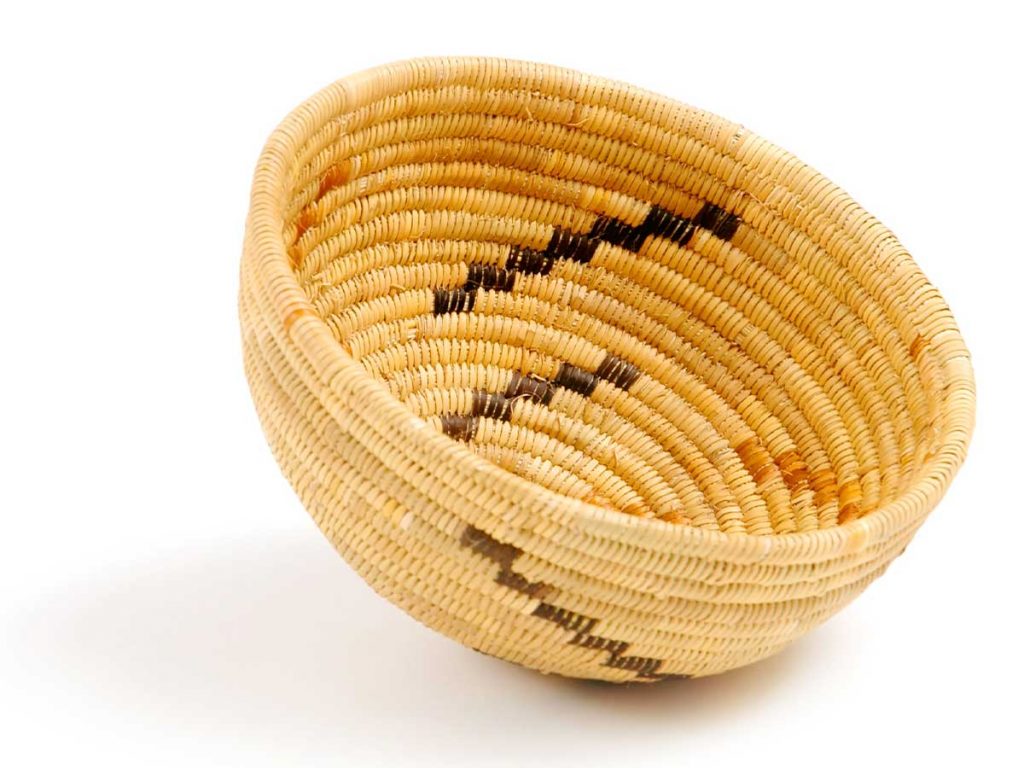 Lake “Tahoe” is derived from the Washoe “da-ow-a-ga”. As the story goes, foreign ears misunderstood the phrase and came up with “Tahoe” instead. “Da-ow-a-ga” translates to “edge of the lake”. 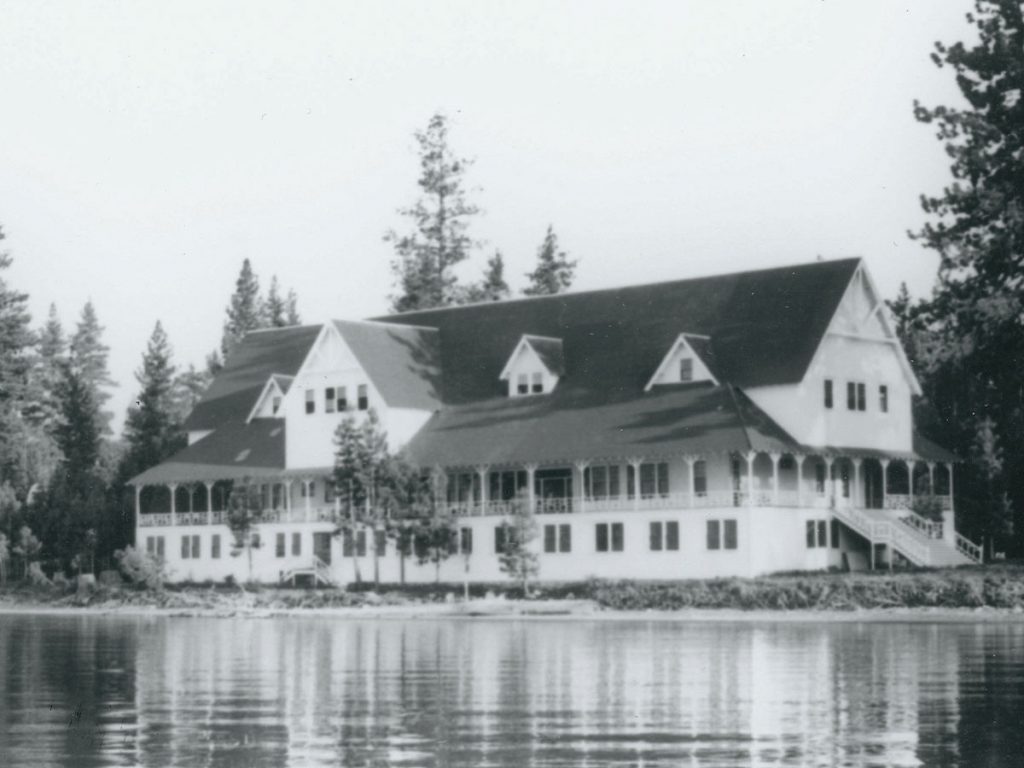 Explorer John C. Fremont is credited with being the first white settler to view Lake Tahoe in 1844. Once gold was discovered in California in 1848, pioneer traffic to the region significantly increased. A popular route to access the goldfields was the Mormon-Carson route, south of Tahoe and through Lake Valley (present-day Meyers). Businesses sprung up to service travelers, including Yank’s Station, in 1859. Ephraim “Yank” Clement was a lively character who became integral in shaping the Tallac Historic Site.

In the 1860s, silver mines boomed in Nevada, and passenger trains began operating on the North Shore. This change decreased traffic via the southern route, prompting Clement to invest in other business ventures. In the early 1870s, he bought eight acres of land at Tallac Point on the Tahoe shore. The land was previously a federally-owned parcel sold into private ownership. He and his wife Lydia built a hostelry at the site called the Tallac Point House. The structure could sleep 40 guests and included a ballroom and camping grounds. While Clement’s business grew, another colorful, outspoken character wanted the same land for a much grander vision.

Elias J. “Lucky” Baldwin purchased the remaining 138 acres within the parcel in 1872, which reserved the eight acres already sold to Clement. Baldwin was a self-made millionaire with landholdings throughout California; he also purchased property around Fallen Leaf Lake, Taylor Creek, and Tallac Point. For obvious reasons, Clement and Baldwin famously did not get along. In 1880, Baldwin foreclosed on Clement’s Tallac Point House and immediately began improvements. Baldwin’s vision was one of grandeur and elegance. He added cottages, greens for lawn games, waterlines, and a boat for excursions. His resort was secluded, pricey, and attractive to the wealthy San Franciscans he hoped to serve.
Yank Clement was not finished with the Tallac area, however. Instead, he purchased a sliver of land east of Baldwin’s property and built a new hostelry, the Cascade House. This structure served a clientele lacking the same deep pockets as those who frequented Baldwin’s resort. Clement was a year-round resident of Lake Tahoe and would live at this site (present-day Pope Estate) until his death in 1891. Baldwin later purchased the land from Clement’s surviving wife. 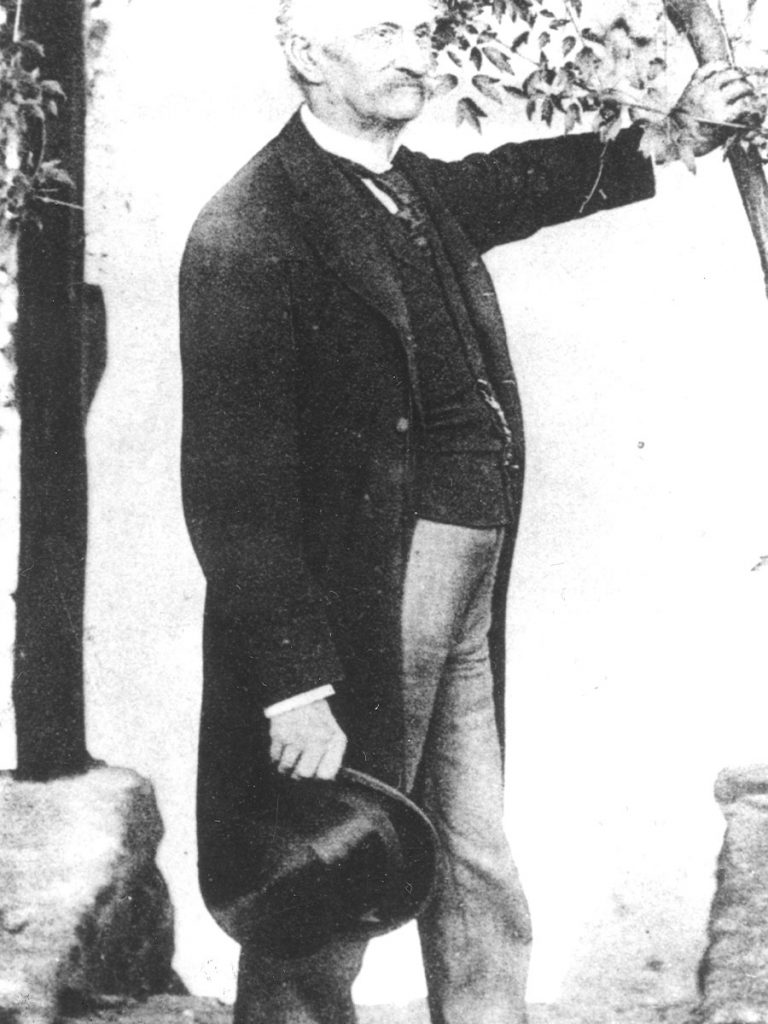 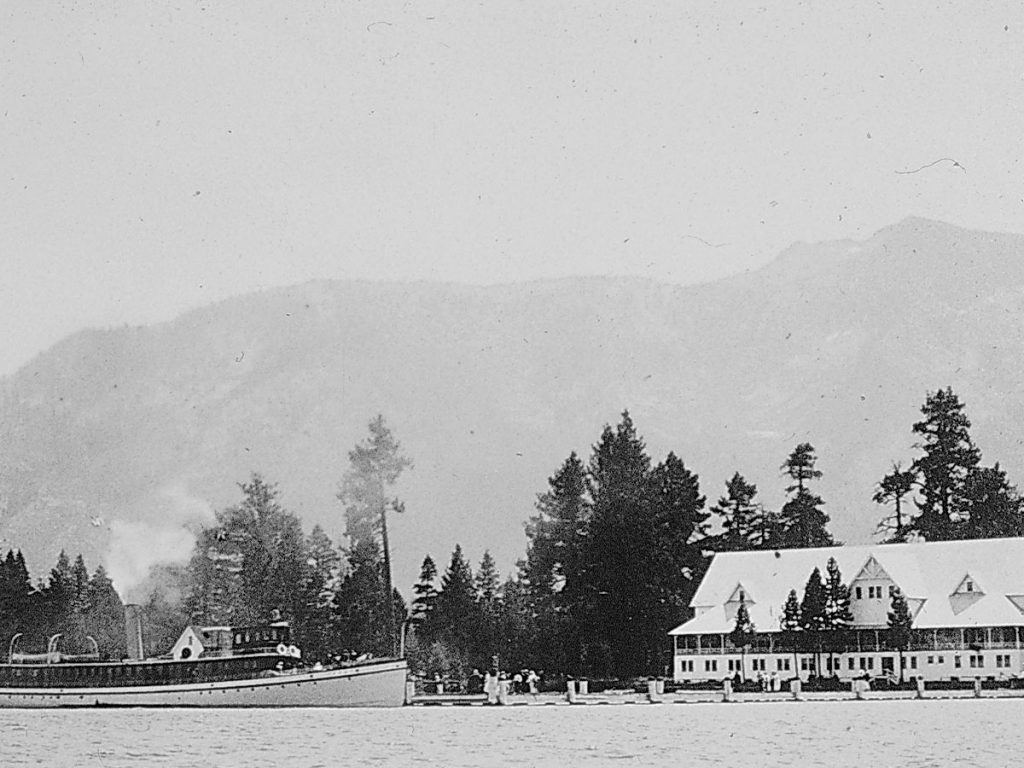 Completed in 1899, Baldwin added a second hotel at his resort, the Tallac Hotel. A marvel in its time, the building had electricity powered by the Fallen Leaf Lake dam and indoor plumbing. The resort was touted as “the grandest in all the world,” and Baldwin added a casino shortly after the hotel’s completion. To help finance these improvements, Baldwin sold the parcel of land comprising the current-day Pope Estate. First, Baldwin leased the land to George Tallant in 1894, and Tallant built the original 2,000 square feet of the Pope House. In 1899, Baldwin sold the property to the Tevis family after Tallant decided to move. The Tevis family invested much into the house and land during their 20-year ownership of the site.
In 1909, Lucky Baldwin died at the height of success in Lake Tahoe. The casino would close a few years after, and, with the outbreak of World War I, the rest of his resort. In 1914 the Tallac Point House burned down, and the Tallac Hotel was demolished in the 1920s. Only two buildings from the resort survive today, located on the current Baldwin Estate (Anita and Dextra’s cabins).

Lucky Baldwin’s heirs grew up enjoying summers in Lake Tahoe. His daughter, Anita, and granddaughter, Dextra, used their inheritances to build private summer homes in the area. In 1921, Dextra commissioned her Scandinavian architecture home to be built adjacent to the old Tallac Hotel. Anita’s home was constructed at Fallen Leaf Lake; however, it has since burned down. Dextra Baldwin McGonagle, her family, and staff spent their summers at Lake Tahoe, quietly enjoying the scenery until her death in 1967.
In the early 1920s, the Tevis family experienced a financial crisis and were forced from their beloved Tahoe vacation home. They had doubled the original house’s size, adding gardens, ponds, and many servant quarters to the property. In 1923, George A. Pope of Talbot & Pope Lumber brought the home out of bankruptcy by purchasing it from the bank. Multiple generations of the Pope family vacationed at this site until the family chose to sell it in 1965. 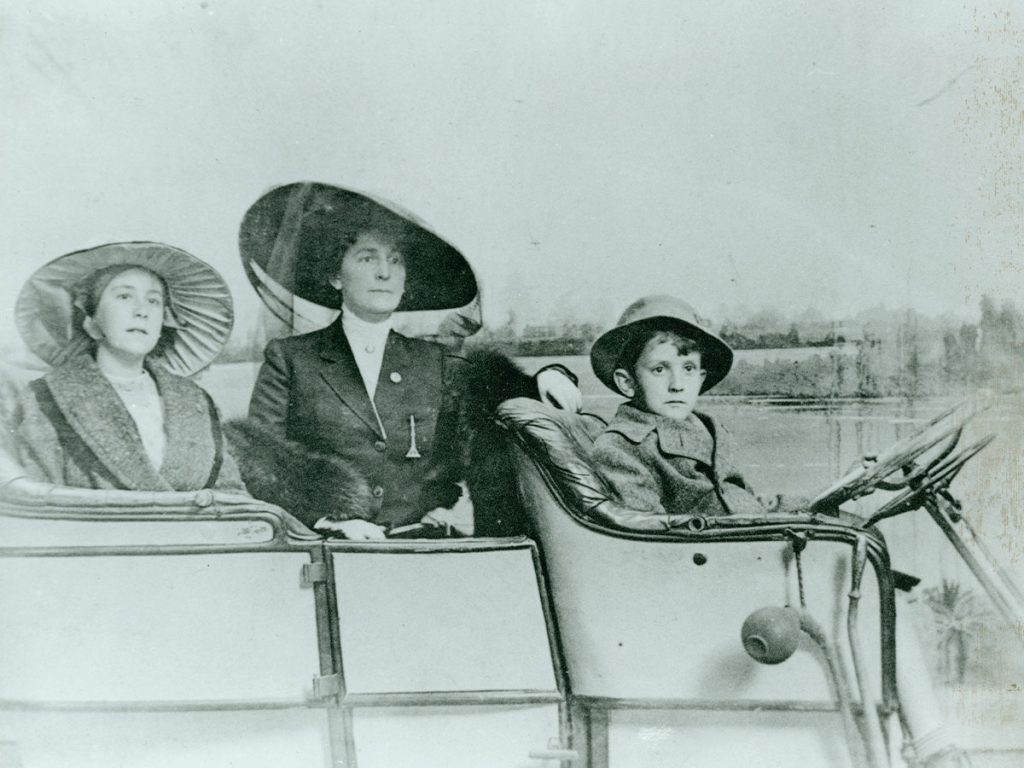 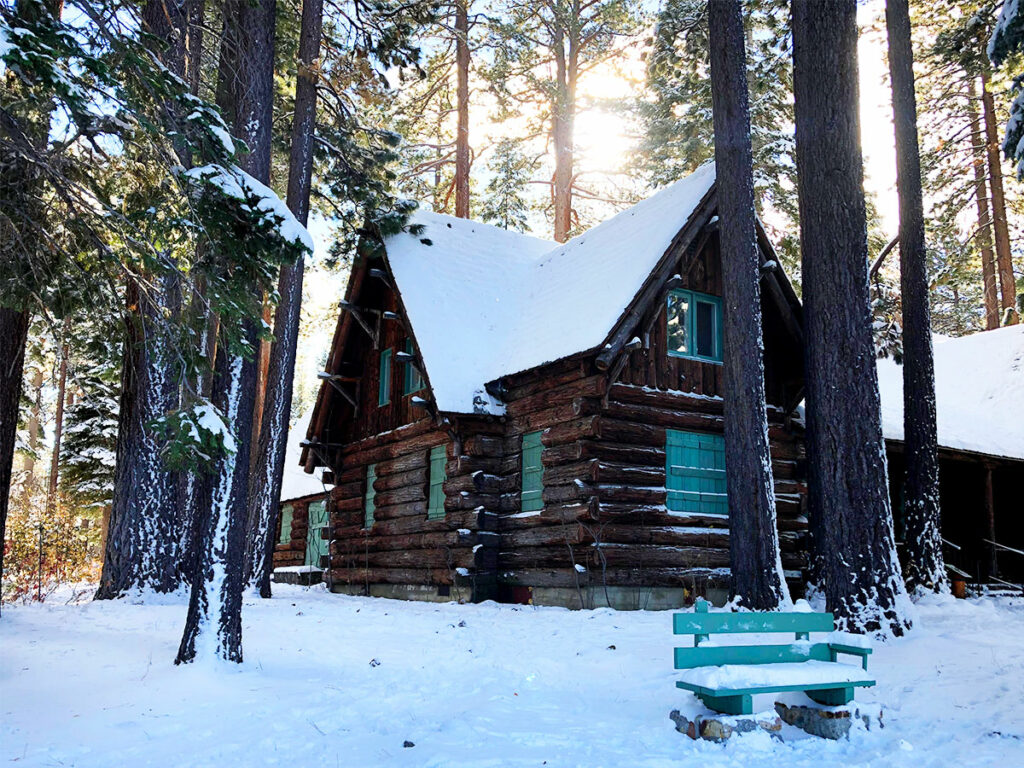 In the 1960s, the environmental movement was gaining national momentum. Many lake-saving initiatives began during this time, while the U.S. Forest Service started a recreation initiative. At the time, very little public access to Lake Tahoe was available. To increase equitable lake recreation, the USFS began purchasing private lakeshore properties to convert them into public spaces. In 1965, the Pope family agreed to sell their property so that it may again enter the public domain. In 1969, after Dextra Baldwin’s passing, her descendants also chose to sell their property to the Forest Service (much of the old resort grounds had already been sold). In 1971, the Heller Estate was purchased (operated by Valhalla Tahoe).
The Forest Service maintains ownership of these historic estates and lakeshore access, readily available for public enjoyment. However, the buildings themselves fell into disrepair, and it would take decades for restoration and repairs to be complete for visitors to enter the buildings safely. In the late 1980s, the first guided tours of the Pope House were offered. By 1990, the Tallac Museum (Dextra Baldwin McGonagle house) opened for visitation and historical interpretation. Interpretative programming has grown to include historic baking classes, blacksmithing, and docent tours in the decades since.

Restoration and maintenance are ongoing at Tallac as time and weather continue to deteriorate structures.

However, as Lucky Baldwin would famously say, during difficult times,

Enjoy a step-back-time with this short Pope House tour from 1994. Much has changed since then, as restoration work continued throughout the decade. To see the house in its 1920s prime, join a docent-guided tour!

Play Video about Pope House in 1994 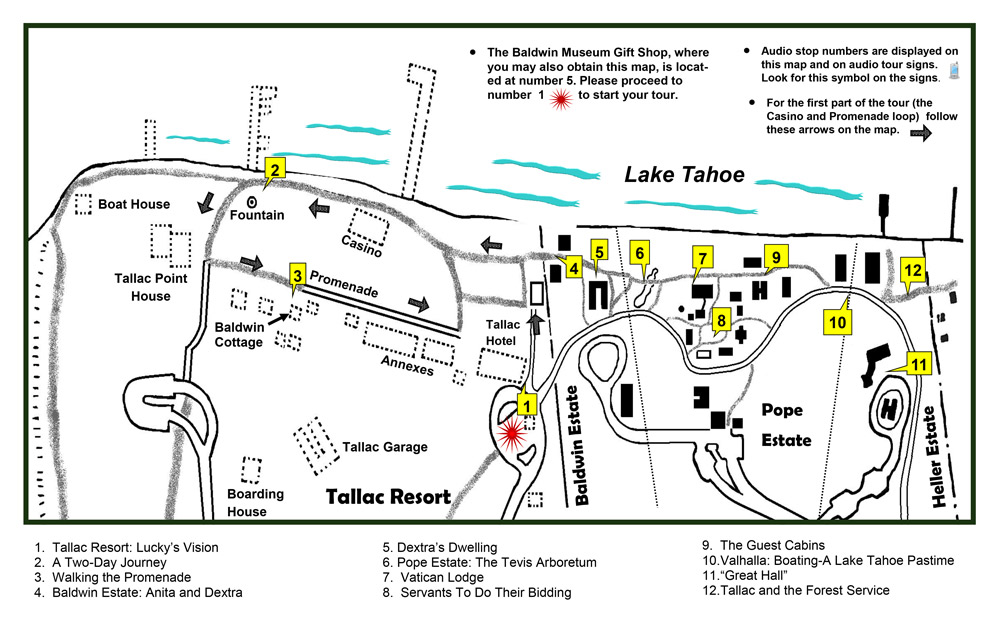