Basin and Range Forestry offers collaborative leadership for a variety of forest health initiatives. BRF has treated over 50,000 acres across our service region, offering support for numerous partners and stakeholders, including The National Forest Foundation, US Forest Service, Bureau of Land Management, the National Park Service, and the US Fish and Wildlife Service. The program also works closely with Conservation Districts, CA Fire Safe Councils, and Land Trusts to design, implement and evaluate forestry projects.

Establishing a partnership with the Great Basin Institute is a straightforward process involving cooperation between three major parties: an agency grant/contracting officer, a GBI grant/contract representative, and the project manager. To initiate an agreement, and for assistance with developing a project cost estimate and timeline for key milestones, please contact Bill Buckley, wbuckley@thegreatbasininstitute.org.

Once a cost estimate is articulated and a funding source is identified, the scope of work and cost estimate details are either advanced through GrantSolutions or forwarded to your agency grant/contracting officer to establish an agreement. Finally, a fully executed copy of the agreement is provided to both parties to be kept on file. The timing of this process varies by agency and can typically be completed within a few months. 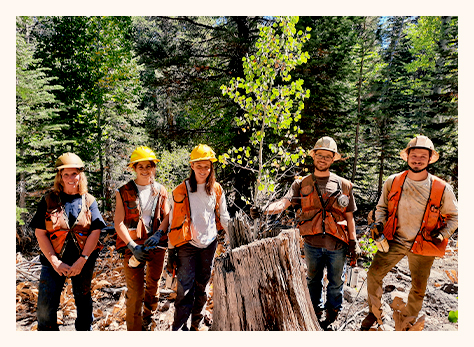 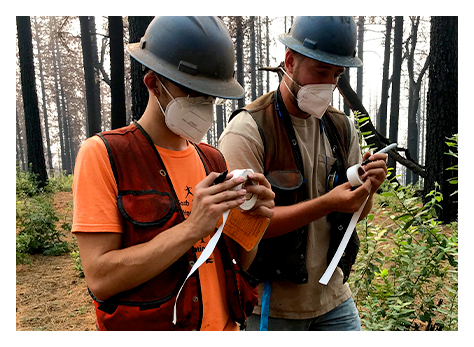 Our dedicated program staff can help guide you towards partnership with Great Basin Institute.

Recent drought has led to dieback of 50 to 80 percent in a number of species, specifically ponderosa pine, sugar pine, white fir, and incense cedar. It has also led to increased bark beetle activity in the pine and cedar stands, as well as other insect and drought mortality in the white fir component. As a result, there are several areas of high mortality across the landscape. A portion of the area has numerous dead trees mixed with a few live trees, and several of the pine plantations are completely dead due to insect activity.

A combination of commercial biomass removal; mastication of brush and smaller trees; hand treatments including brush cutting, hand thinning of live and dead material, and piling; and prescribed burning including pile burning and underburning; and limited reforestation would be used to treat stands. The goal is to improve heterogeneity by modifying stocking and species mix, restore forest health and wildlife habitat, and re-establish the fire cycle while reducing high fuel loads across the landscape.

This project protects irreplaceable giant sequoias, threatened and endangered species habitat, and livelihoods of small communities near Sequoia and Kings Canyon National Parks (SEKI). The work proposed will thin small diameter conifers, create fuel breaks in key areas to slow advancing fires, and restore areas where the 2020 Castle and 2021 KNP Complex Fires burned giant sequoias. Without substantial mechanical thinning, there is no pathway for conducting necessary prescribed fire to reduce hazardous fuel loading, and few options for stopping wildland fire in the steep, snag-dense terrain. The mean annual risk of wildfire in the project area is 89%; for this reason and others this project is critical for the protection of the most vulnerable of California’s mixed conifer forests where they encompass groves of giant sequoias. Protecting these ancient forests is vital because they serve as both state and global carbon dioxide sinks, sequestering large amounts of carbon in live wood tissues that would otherwise be emitted back to the atmosphere as black carbon during wildfires.

Ancient sequoia forests in California are important and functionally irreplaceable. They are special places for the love and stewardship they inspire, for their role as habitat for old growth-dependent threatened and endangered species (e.g., Pacific fisher and California spotted owl), and for the large amount of carbon they sequester annually that helps offset CO2 emissions from our daily use of fossil fuels. Healthy old growth forests in the Sierra Nevada are also critical for water purification and water quality. Aided by the continued presence of old growth mixed conifer giant sequoia forests, California experiences the 1849 Gold Rush every year anew when millions of acre feet of purified spring snowmelt cascades down the mountains into the Kaweah and other rivers to foothill reservoirs for drinking and agriculture. Giant sequoia trees are incredibly long-lived and the 40 groves in SEKI serve as the spokestrees for forest health issues in the Sierra Nevada and for the impacts of climate change in general.

Multiple projects are taking place on the Eldorado National Forest in the vicinity of the Crystal Basin on Placerville and Pacific Ranger Districts that together contribute to landscape restoration and resilience. The Crystal King Restoration Partnership project is a roughly 300,000-acre area which contains the Crystal Basin, the King Fire area portions of the South Fork of the American River (SOFAR) National Cohesive Wildland Fire Management Strategy Collaborative Area, high value recreation sites, important infrastructure, wildlife habitat, and forest lands.