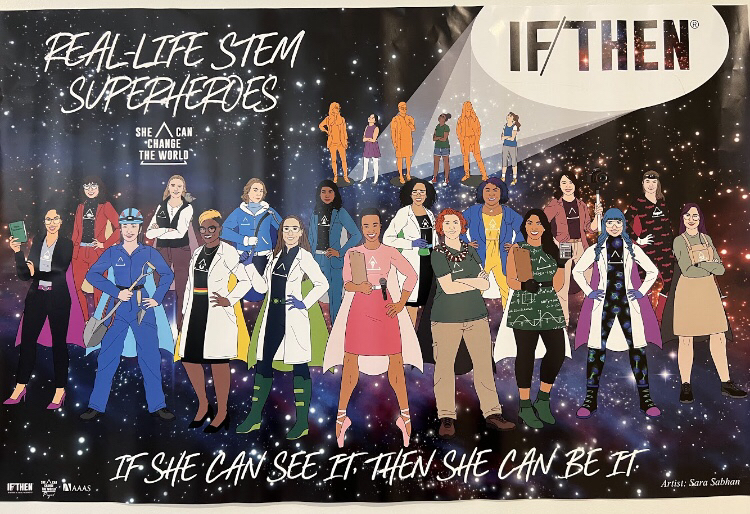 When one thinks of the Great Basin Institute, the San Diego Comic-Con is perhaps not the first thing that comes to mind. But lo and behold, we did indeed have a presence at this year’s convention in the form of GBI Research Associate Samantha Wynns, who has been consistently involved in exciting, unique projects, often in association with the IF/THEN initiative, which seeks to highlight and encourage the role of women in STEAM. A previous collaboration saw Sam Wynns turned into a 3-D printed statue, and her work at SDCC is equally noteworthy. In an effort spearheaded by Sam, IF/THEN introduced a STEAM fair to the Comic-Con Museum from July 21-24, 2022, and made its presence know throughout the convention, contributing to various panels.

We asked Sam to tell us a bit about her experience and we’re very pleased to present her account of the SDCC IF/THEN Pop-Up STEAM Fair.

I’ve been going to San Diego Comic-Con since I was 15 years old, and you can really call the fan community my first community. When SDCC first started, it was quite small and comic-only focused. It’s changed a lot over the years and has become San Diego’s biggest event of the year with increasing scientific programming. These factors sparked an idea to propose an IF/THEN Comic-Con Takeover with my fellow AAAS IF/THEN Ambassadors; the goals of the IF/THEN Initiative are to spark youth’s, especially girls’, interest in STEM by providing role models. The scale and composition of SDCC afforded us the opportunity to reach new and large audiences, so it seemed a natural fit. Fortunately, the folks at IF/THEN agreed with me and supported our STEAM experiment! On a personal level, I was in heaven – the merger of my two great loves, fandom and science, and the intersection of my two communities was a wonderful thing to experience.

One aspect of being a good role model, in my mind, is also being a good mentor; it’s not enough to just “lead by example” but, rather, to teach others how to lead. I work with a lot of youth and I’m always looking to give them opportunities in science, science communication, leadership, collaboration, and other life skills. At this STEAM Fair, I enlisted the aid of my three teenage apprentices to run activities with the IF/THEN Ambassadors; not only did this give them an opportunity to learn, it also gave them an opportunity to sharpen those skills. Additionally, I hired a young STEAM-influencer named Ayonnah Tinsley (https://www.yayastars.com/) whom I met at the Teen Vogue conference in 2019. This young woman published a book called “This is What an Engineer Looks Like” when she was 15, and I thought she’d be the perfect addition as a youth correspondent. Ayonnah took over IF/THEN’s social media channels with interviews and engaging content, a great bullet in her resume!

Comic-Con and the Comic-Con Museum both see a very broad range of demographics; people come from all over the world to Comic-Con, and to Balboa Park where the Comic-Con Museum is located. To capture the interest and light a spark in this diverse audience, I conceptualized and created a very diverse STEAM Fair! From hands-on STEAM activities with the Ambassadors and IF/THEN Coalition partners, to career talks, to STEAM cosplay, to video games, there was something for everyone. I myself led a hands-on activity that demonstrated how we monitor reptiles and amphibians at Cabrillo National Monument, as well as gave an interactive career talk titled “Evolution: A Mystery in Three Acts”.

This Takeover was a grand experiment, and we had no idea how it would be received. The hope was that we’d reach hundreds, if not thousands, of folks…and we succeeded! We had about 2,000 attendees to the STEAM Fair, and about 1,100 combined attendees to our panels. Not to mention many thousands of folks engaging with IF/THEN and Ambassadors’ social media content. More than just numbers, however, is the connection that you make with individuals. For example, one young girl told me that she wanted to be a scientist that works for a national park when she grows up – she asked me a ton of questions and stayed at my table for a very long time, completing every activity I offered her. After the “Science of Jurassic World” panel, a woman asked to take a selfie with me and Dr. Earyn McGee – she was a science teacher that doesn’t meet many women in STEM and was talking about how this visibility was so important for the students she teaches. It’s moments like that that I know the time, money, and efforts that go into events like this are absolutely worth it. It means something to people in their every day lives.

STEM initiatives like IF/THEN couple well with popular arts conventions on a variety of levels. First, there is a lot of STEM in the popular arts – from the themes of said art (science fiction, anyone?) to the technology that goes into making it, STEM is an integral part. Second, art is known as a creative endeavor…but so is science! Scientists have to come up with new questions, and find creative ways to answer those questions and/or creative ways to solve problems. There’s a wonderful quote from Einstein that I use all the time: “Imagination is more important than knowledge.” Without imagination in the first place, we’d never make scientific discoveries. Lastly, there’s an intangible reason that I think representing STEM at a popular arts convention is important – to challenge people’s perceptions of what it means to “be a scientist”. Scientists are diverse and have diverse interests, and introducing people to this idea, meeting them where they’re at, is essential to bringing diversity to STEM. Making scientists and, therefore, science relatable encourages people to envision themselves in those spaces.

I am a lifelong geek: from fantasy like Game of Thrones to sci fi like Star Trek and Star Wars to anime like everything by Hayao Miyazaki, D&D, board games, video games (Mass Effect is my favorite), you name it. Probably unsurprisingly, I often gravitate to media with strong female characters and Nausicaa, Princess Mononoke, Commander Shepherd from Mass Effect, the elves of Elfquest hold a special place in my heart. Nausicaa and Mononoke are both warriors for nature (one uses science and diplomacy, and the other uses force); Commander Shepherd is, basically, everyone I want to be as a leader; and the women of Elfquest helped shape my young views about what I could do and be – anything I wanted. So, while real-life role models are certainly important, fantastical role models can also have an influence in someone’s life with evidence to support the veracity of this claim such as this report on the “Scully Effect”.

GBI recently was asked by CAL FIRE to contribute to

Bleak. The word doesn’t necessarily conjure the loveliest images. And