The sand dunes at Peterson Reservoir were literally crawling with snakes, lizards and kids on Saturday, September 11th, for Ash Meadows’ fall kickoff event: Let’s Explore Snakes & Lizards! Approximately 43 children and 15 adults attended the event, from Amargosa Valley Elementary School, Death Valley Academy, Shoshone Middle School, Tecopa-Francis Elementary, and the Pahrump 4-H Rockhounds. Extra special thanks goes to Craig Hill, superintendent of Death Valley schools, Karen Liberty, principal of Amargosa Valley school, and Jeannie Geiser, leader of the Pahrump 4-H Rockhounds, for organizing buses and transportation for their students. The goal of the event was to engage children with their local environment by giving them a chance to freely explore and exposing them to the incredible diversity of native reptiles that exist in their local area. Clearly there was a community interest in this experience – an additional 15 participants called to sign up, but there was absolutely no more space available!

The hard work and dedication of Ash Meadows and GBI staff, as well as 10 outside volunteers made this event possible – it truly was a team effort! Building and Grounds Coordinator, Perry Souza, and Ecological Technicians, Sam Skalak and Jeff Goldstein, spent several early morning hours setting up three large tents, picnic tables, chairs, trash cans, and other items needed for the event – no small task! Visitor Services Specialist, Cyndi Souza, provided invaluable assistance in the event planning, development, and promotion. Her artistic talents, as well as those of volunteer Paul van Els, are displayed here in the beautiful photographs they captured throughout the day. Many other people were involved in the facilitation of the event itself, which took place from 10am to 3pm.

The weather cooperated with us that day – it was warm (89°F), sunny, and virtually windless. Cyndi Souza and Death Valley Park Ranger, Stephanie Kyriazis, greeted the participants as they started arriving, signed them into the registration book, and gave them a nametag and a free Ash Meadows water bottle to refill throughout the day. After participants signed in, they were free to touch, explore, and ask questions about a variety of captive, live reptiles on display. Terry Christopher, Associate Director of Southern Programs with the Great Basin Institute, and Paula and Bill Garrett, education volunteers with the Nevada Department of Wildlife, along with their two children, Gwen and Evan Garrett, showcased a Gila monster, chuckwalla, desert tortoises, California king snake, gopher snake, rosy boa, yellow-backed spiny lizard, woodhouse toad, and tarantula, among other species.

During the following 2 hours, the participants divided into smaller groups and rotated between three different hands-on, outdoor activities. Dr. Lee Simons from Ecological Services, our event “herpetologist”, led the children to a pitfall array with 10 traps. The traps had been set the day before and monitored frequently, allowing 24 hours for wildlife to potentially be caught in the pitfalls. The kids watched with bated breath as Lee, with the assistance of Jeff Goldstein and volunteer Kelly Dougles, checked the buckets for signs of life. One trap caught a young whiptail lizard with a bright blue tail. Another trap had 2 different species of velvet ants – flightless stinging wasps. Other traps held a grasshopper mouse, wolf spiders, and a young zebra-tailed lizard. One bucket was presumed to be empty until a young girl said to Lee, “I think there’s a scorpion in the bucket”. Sure enough, upon closer inspection, Lee pulled out a well-camouflaged desert hairy scorpion!

GBI employee and Southern Nevada Agency Partnership (SNAP) Environmental Education & outreach Specialist, Megan Urban, led participants on an exploration of the sand dunes to better understand its role as wildlife habitat. Children were equipped with rulers and field guides to identify the many tracks and burrows found in the sand. Alyson Mack led the participants to the far side of the dunes to play a game of survival called “Predator-Prey”. The children ran through the dunes, playing the role of predators and prey, in an effort to survive by finding sufficient food and water, and hiding from predators. By the end of the game, all the kids understood just how difficult survival could be in the desert, and how adaptations like camouflage, hopping, or small-size are very useful! After these two hours of exploration in the sand dunes, everybody was eager to return to the tent for some shade, water, and lunch!

After lunch, Terry Christopher and Paula Garrett gave a joint presentation about the many native reptiles in Nevada, using their live, educational animals. The participants were eager to ask questions and touch these fascinating creatures!

The day ended with a fun team-building game about desert adaptations, led by Jeff Goldstein, and an Ash Meadows reptile scavenger hunt led by Alyson Mack. After 5 hours of fun in the sun, sand, and heat, everybody was exhausted and ready to head home. There was, however, one last challenge: the kids were invited to write down as many reptiles native to Nevada as they could remember. The winner was a student from Death Valley Academy, Thomas Raddick, who correctly named 7 native reptiles – but many other contestants came very close. For his prize, Thomas will receive the book “Desert Snakes” by James W. Cornett. All the children took home a prize that day: the Nevada Department of Wildlife donated a case of videos about the venomous reptiles in Nevada, that the children and school teachers were pleased to bring back to their classrooms and libraries.

All told, the first Let’s Explore event at Ash Meadows was a huge success for everyone involved: kids, parents, teachers, volunteers, and GBI and Ash Meadows staff. The event provided opportunities for parents and their children to learn together, new friendships to be formed within the local communities, and discoveries to be made in the outdoors. Good word-of-mouth is spreading – and spaces are quickly filling up for the next three Let’s Explore events coming up this fall! More news to come! 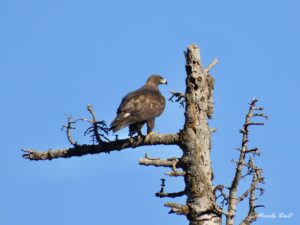 We’re always excited to receive images from the field, and

Partnering with the California Tahoe Conservancy

GBI is proud to announce that we have entered into